Designed with traditional remote control buttons customers are used to, navigating Apple TV with the Function101 Button Remote is easy.

Compatible with most TV sets

The infrared technology (IR) will allow you to synchronize the remote control with your TV in just seconds to control power, volume, and mute functions.

The thoughtful approach to button layout makes it easier than ever to use your Apple TV, offering a user friendly alternative to the Siri Remote.

The Function101 Button Remote for Apple TV supports programming to many popular brands:

The remote can also be programmed with over 100 other TV brands.

The Function101 Button Remote for Apple TV can also be paired with many soundbars & receivers, with auto pairing included for:

The remote can also be programmed with many other soundbar & receiver brands.

The Function101 Button Remote requires line of sight to the Apple TV as it uses IR technology, with a range of up to 12 meters.

Works with all Apple TVs

The Function101 Button Remote isn't equipped with a microphone for Siri, but you'll find all of the buttons you need right at your fingertips. 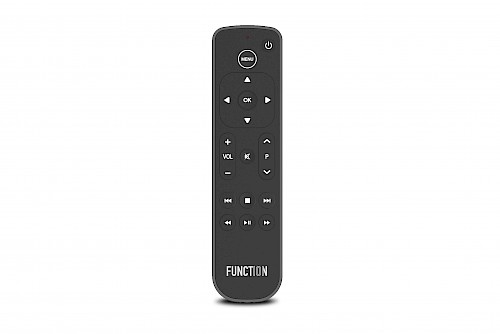 ...The Function101 Button Remote for Apple TV is great because it fixes one of the worst gadgets in the history of gadgets: Apple’s $59 Siri Remote. Disagree? Then I guess you must enjoy Apple’s razor-thin easy-to-slip-between-couch-cushions shape, the jumpy trackpad and the oh-so-helpful which-end-is-up button layout.

Instead, the granola-bar-sized Function101 remote, which instantly pairs with an Apple TV, has real, bouncy buttons. You can pick it up without looking at it because it looks and feels like an actual remote.

Unlike many other remotes that often try to replicate the Siri remote, the Button Remote touts itself as a more traditional alternative.

It features buttons that closely mirror that of a VCR or DVD remote. There are buttons for controlling volume, navigating menus, video playback functions (such as pause, rewind, and fast forward), and a power button.

The Button Remote is ideal for older users who may not like the minimalist interface of the Apple TV remote or its alternatives. It's also great if you worry about breaking the glass of the remote included with their Apple TV.